Why I photograph the urban landscape?

I take and make photographs for a variety of reasons, some pleasurable, some emotional, and some intellectual. I also am the kind of person who enjoys working on tactile objects and the way using my hands can be closely aligned with using my mind.
I have been interested in making pictures in the Urban Landscape since 1988. I began my photography studies in 1987. After 2 years I realised I was mostly interested in photographing the landscape and in the context of art. I spent the next 3 years undertaking a fine art degree. This allowed me to think about the what the why and how of art making and could I try and make art this way?

In the beginning my career I was influenced by Ansel Adams, and the idea of a sublime landscape. Images made in his style of similar subject matter were the kind I initially sought to make. As an urban dweller most of my life trips to the ‘wild’ were infrequent and determined by my free time or the weather. But mainly time.
What this meant was it was difficult to really capture imagery that was truly ’sublime'. Free time to travel was also a hindrance to making the kinds of pictures I aspired to. This was is in part due to light. Light in Australia is at its best in the shoulder periods leading up to autumn and spring. Winter light when it shines is also wonderful. Of course light is often best in the magic hour an time of the year. Magic hour in the suburbs is easy to chase, in the outback, not so easily. Most ‘wild or sublime’ locations in Melbourne are at a minimum one hours drive away. So getting to this kind of location is time consuming and can be difficult, even with a car. The urban landscape is all around me. I can catch public transport there if I need and even on occasion walk.
While at University I was introduced to Joe Deal’s work. In particular the San Andreas Fault series [see image from sofomoma.org below]. The idea that images of a constructed or altered landscape could be valuable and interesting helped me look in other directions and think about my own story. Other Photographers and Artists I was introduced to in this period included, Robert Adams, Frank Gohkle, Hille and Bernd Becher, Lewis Baltz, Henry Wessel Jr., No urban landscape photographer worth their salt can neglect to mention the pivotal 1976 exhibition at George Eastman House, “New Topographics, pictures of a man altered landscape” either.


I go to a place internally in my mind. A place that is hard to describe but very beneficial. It engages my brain in a way where I focus on the moment like no other activity I engage in. Time disappears. Time becomes just a series of small decisions. Left? Right? Up? Down? More exposure less exposure, wait; lots of waiting. Looking without thinking and at the same time only looking and thinking?

Projects? Everyone has a project. Pictures however are only ever pictures. We attach meaning and substance to them as a consequence. one day early in July the light was magnificent, as it often is in Melbourne mid winter. I went outside and made some pictures with both colour and black and white film, in 120mm and large format. Because the light struck me as well as the mood , and because it felt right. Is this a project? Does it not being a project make it invalid work? How do I take years worth of these images and make then into a valid narrative?
People are talking about surveillance capitalism a lot these days. The places I like to go are often bereft of security cameras, but can also be bristling with them. I’ve been asked rightfully and wrongfully to leave several areas in and around Melbourne over the years. If there are no cameras around I am truly alone in a large city. Something that means more to me s I get older.
Making pictures using  camera, especially a film camera gives a level of purpose that very little else in life gives me. The entire process is somewhat meditative. From exposure in camera to final prints.

In the end I make images of the urban for several  reasons.
For the geography.
As Autobiography.
As Metaphor

Last week saw another new record for my views on flickr, with my most viewed picture being one that I had uploaded only a day or two  previously. As of today, the image is the most viewed in my entire stream sitting at a figure north of 70,000 views!

Sadly there is no real info on the traffic and where it comes from or why. All I can say is, the majority of the views came from mobile devices and were split evenly between Android and iOS.

The sculpture outside the SLV.

State Library Victoria is the central library of the state of Victoria, Australia, located in Melbourne. It was established in 1854 as the Melbourne Public Library, making it Australia's oldest public library and one of the first free libraries in the world. The Library's vast collection includes over two million books and 350,000 photographs, manuscripts, maps and newspapers, with a special focus on material from Victoria, including the diaries of the city's founders, John Batman and John Pascoe Fawkner, and the folios of Captain James Cook. It also houses some of the original armour of Ned Kelly. The Library is located in the northern centre of the central business district, on the block bounded by Swanston, La Trobe, Russell, and Little Lonsdale streets.

I photograph here on and off and find winter is the best time for this particular picture. The sun is usually lower in the sky, the trees have no foliage and signs of rain help too. The concrete blocks in the middle ground right are a new addition to the scene since there has been one instance of a car being used as a weapon on the streets of the CBD recently.

I used to make pictures of all the abandoned shopping trollies in Sunshine, as I stumbled upon them. They reside on flickr

I was drawn to the incongruous nature of this image in a commercial plant nursery in front of barb wire.

Tens years ago today I was on an extended field trip with Latrobe University and a group of American exchange students, touring outback New South Wales.

I was also about to realise I was at the darkest point in my life. I survived thanks to my gorgeous wife and my Doctor.

This spectacular sunrise was only a handful of pictures I made on this trip.

I recently purchased a book/catalogue of an exhibition of Ralph Eugene Meatyards work. The exhibition was held at the University of Kentucky Art Museum, from the 8th of September to the 9th of December 2018. The book contains images of his work that I had not seen before. It also contains short pieces of text by other artists who respond to or knew him. Emmet Gowin is one such artist.
He is one of the few modernist photographers from America who I have the good fortune to spend a little time with. He came to Australia in the mid 1990s, and ran a seminar and gave a lecture. I was privileged to be able to attend both.


“This time the mask is in here hand. This tie the mask isn't needed, nature has provided the transformation.


Normally, the female adult in Gene’s pictures is his wife Madelyn. This time I’m unsure. And still, i think it is. For there is a rare level of intimacy in this image, of warm flesh, the whole body is ready and moving forward. And there is a ripeness, a willow thinness, and the sensuous curve of her jaw and chin and the fullness of her breasts. Thisis a real women fully alive.


In 1966 when this image was made, Gene was at the height of his visionary powers. We first mt the next year. I had just finished Graduate school and was beginning to teach in Ohio. Even before we settled in, a postcard arrived from Gene: “We hear you are ging to be good, send me your thesis, I want to show it at Eyeglasses of Kentucky.” Happily, I already recognised Gene as one of the three most important visionary photographers in America, so I did not hesitate.


Over the next five years we met at least a dozen times. In 1970, Gene travelled to Dayton to meet photographer-philosopher Frederick Sommer. Each recognized the other as a Master Artist. In spite of the many differences there was a genuine kinship. Both were visionaries of the fist order.”Life itself is not the reality. We are the ones who put life into stones and pebbles.” Sommer tells us. “If we did not dream, reality would collapse.”*


The work of Ralpg Eugen Meatyard is the work of an American original. Everything about his photography speaks for and of the right and importance of human imagination,If we did not dream, life would be less interesting.
*Frederick Sommer, “Frederick Sommer: 1939-1962 Photographs: Words Not Spent Today Buy Smaller images Tomorrow,” Aperture 10, no, 4[40] (1962): 163

The images in the book are finely reproduced even though many I have never seen before.

To hear a story about the relationship between two of my favourite photographers being described in such glowing terms make me glad I do what I do.

Roger Ballen also has a quote, along with Duanne Michals & Marvin Heiferman. 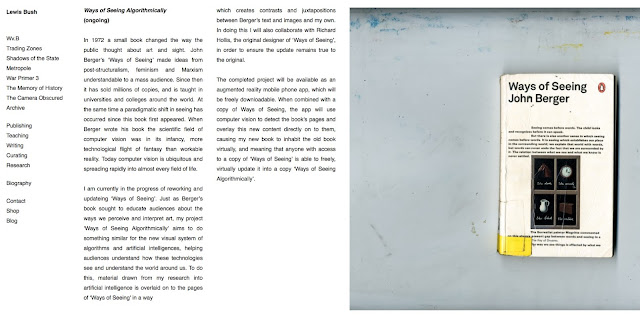 Lewis Bush is going to republish John Berger's seminal work Ways of Seeing to include and examine AI and machine vision. Excited!


"...I am currently in the progress of reworking and updating ‘Ways of Seeing’. Just as Berger’s book sought to educate audiences about the ways we perceive and interpret art, my project ‘Ways of Seeing Algorithmically’ aims to do something similar for the new visual system of algorithms and artificial intelligences, helping audiences understand how these technologies see and understand the world around us.

To do this, material drawn from my research into artificial intelligence is overlaid on to the pages of ‘Ways of Seeing’ in a way which creates contrasts and juxtapositions between Berger’s text and images and my own. In doing this I will also collaborate with Richard Hollis, the original designer of ‘Ways of Seeing’, in order to ensure the update remains true to the original."