Some of the pictures & ideas I explore.

This page is where I display and share my photography portfolios of  past, present, ongoing and completed work. It will be updated frequently.

My static website is back online, it too houses a gallery of my work of sorts. 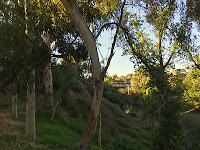 One of my longest running projects is based on the idea that anything or any moment is worthy of being captured. But how interesting is any individual picture when so many are made every day? I call the project Neo-Dcocumentary. I like to exploit the aspects of Digital that has been brought to photography by the technology, in particular metadata and geo-location data. I am then able to build a large memory map that may eventually cover the globe. This project is ongoing. 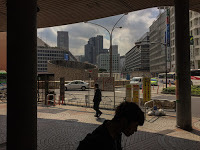 The Situationist International (SI) was an international organisation of social revolutionaries, the exclusive membership of which was made up of avant-garde artists, intellectuals, and political theorists, active from its formation in 1957 to its dissolution in 1972. I take their manifesto and apply it to many situations I find myself in where my vision is heightened. It can be when I wander corners of my home suburb of Sunshine, or walk the streets of Tokyo. I simply call this project after the philosophy that inspired the original movement Psychogeography. It too is ongoing and only digital. 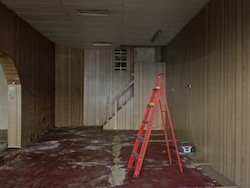 One day, while whiling away time in between lunch and dinner, like so many others in Melbourne, I walked down a street that I knew would be full of life and activity. My aim was to make some interesting pictures of the activity, it was St. Patrick’s Day. While Australia is relatively secular by world standards, there are enough Irish visitors and distant relatives of the Irish immigrants integral to our history to make the day busy. It was also the weekend.

My wanderings didn't amount to a great deal pictorially, but at some point afterwards one image caught my eye. It was of an empty shop, with green walls and a contrasting purple set of stairs strewn with some detritus at the rear, photographed using my smart-phone, for a variety of reasons. For some reason this image struck a chord with me, perhaps the colour, perhaps the objects strewn on the floor, whatever it was, it seemed a pleasing image. As I scrolled though my digital archive a few days after, I started to notice other empty shops I’d photographed prior to this one, most likely subconsciously.

All had a similar composition. It then dawned on me it may be possible to create a body of work that examined this phenomenon of empty shops, after all, Australia at this point was meant to be weathering the GFC quite well. Yet these shops were not difficult to find. I spent the summer of 2012~2013 walking the shopping strips that radiate outwards from the central business district. Breaking down the city by major arterial road and drawing a rough boundary at the approximate 10 kilometer mark I felt I could ‘document’ these strange edifices, all similar, yet subtly different.

I found the size and shape of my smart phone suited this project quite well. I could quickly and easily traverse long stretches of road photographing any and all I encountered, by the end of the summer I had almost covered ¾ of the northwest of the city. The size of the device and its design meant I could jam the camera hard against the glass and photograph through it. The composition was easy to recreate from shop to shop, again made easy by the way the camera on my phone worked.

As I wandered the shopping strips, I contemplated such ideas as the situationists and their manifesto, ideas of the photograph as documentary evidence, and typologies generally.

This project was in fact only made possible by technology, the smart phone I carried everywhere with its discrete form factor and portability meant images could be made any time anywhere and I would never need to gain legal access to the properties in question. I may never had considered it at all if I had not been successful at making a couple of interesting pictures through dirty glass. The growing series is hosted on tumblr 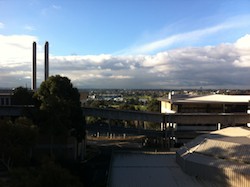 Victoria University has its share of Grey institutionalised buildings, inside and out, room c511 is no exception, it is placed precariously in a way that turns weather watching into a past time. Every time I am in the room, I try to make at least one picture of the view. The view never changes, or rather very slowly, but the light and the weather always put on a show! Currently this work is hosted on tumblr 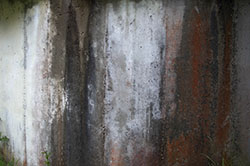 Concrete, the most mundane of all surfaces, is commonly found on many industrial and domestic buildings in Australia. It has become a dominant means of construction in the late 20th and early 21st centuries. It is invariably left its natural grey colour once buildings are complete. This then means with the right light it can become a fantastic abstraction. Add environmental changes such as moisture and the surface to the mix can then make the photographed can barely be recognised for the surface that it is. The work is on flickr 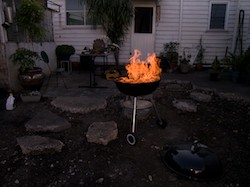 Concrete, the most mundane of all surfaces, is commonly found on many industrial and domestic buildings in Australia. It has become a dominant means of construction in the late 20th and early 21st centuries. It is invariably left its natural grey colour once buildings are complete. This then means with the right light it can become a fantastic abstraction. Add environmental changes such as moisture and the surface to the mix can then make the photographed can barely be recognised for the surface that it is. More on flickr


Doorways to the West 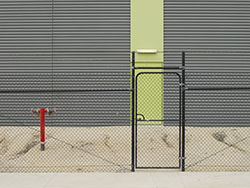 I live in an industrial area west of Melbourne. Manufacturing has declined sharply over the last decade or so. Life in the estates of small to medium manufacturing enterprises has diminished proportionally. Many doors are closed and will remain so for the foreseeable future. This is a typological study of the doors within walking distance of my home.
More on flickr 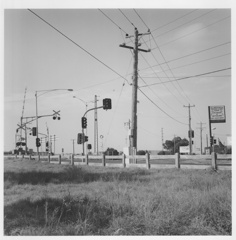 Silver in Sunshine is an ongoing project. Commenced sometime after 2000 when my partner and I purchased and moved into our current house. This work is the first part of a sort of a poem to a place I have called home since moving there. In my spare time I’ve been exploring and capturing this vibrant and changing neighbourhood on film and digital. It’s my way to immortalise areas of my suburb which are overlooked because they are considered ignoble. 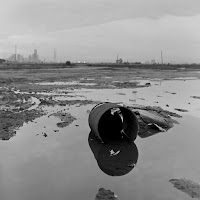 In 2007 I had a solo exhibition at Trocadero Art Space. It consisted of Seven 100 cm square inkjet prints. It was titled, "... across the river styx". It was an exhibition of large scale black & white photographs intended to explore and question the dark sublimity of altered landscapes in Sunshine and other suburbs of Melbourne.

These images attempt to explore the ironies inherent in the mythological representation of the Australian landscape, that have long been apparent; but what makes us desire the unattainable rather than redefine our desires? Is it possible to live in the present? To relax and enjoy the gothic beauty of our damaged (sub)urban backyards? To give up or at least concede the dream?

It is a dark visual essay that relinquishes the search for a pristine nature as false and useless. The work suggests it's time to take the banana lounge outside, sip a beer and relax as the sun sinks in the West, and celebrate all aspects of human endeavour. 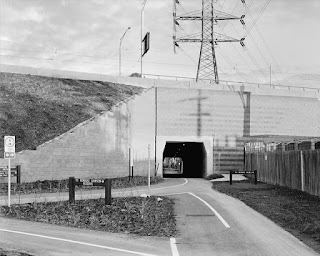 In 2002 I completed my Master of Arts. Having a solo show formed part of the process and the exhibition was at  'First site' Gallery 344 Swanston St City. This exhibition ran from the 15th of May to the 26th of May 2002. It was titled Urban or Urbane? It consisted of 8 inkjet prints of scanned 5x4 inch film, each measuring 95 x 80 cm. 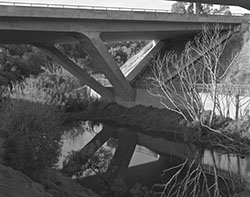 This body of work is yet to be exhibited. Bridge is at once a metaphor and a series of documents; I see the idea of a bridge forming strong connections, between to opposing sides of a chasm. Bridges will stand defiant, even if the traffic they formerly carried is diverted. Bridges often occupy incongruous places, unless you're a homeless person, then it is a place called home. However for everyone else they are often places of no-mans land or serve a utilitarian purpose such as a parking space. I began this project using a large format film camera; I continue using is to this day. Some digitised samples of the work are hosted on flickr.com. 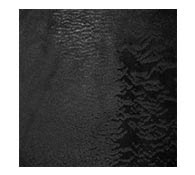 A map is meant to guide and describe the location and terrain between various points. Photographs of surfaces, can sometimes look like maps. Sometimes maps don't give the whole picture, photography is very good at giving only part of the picture. These small, silver gelatin prints attempt to mediate between maps and photographs between fact and fiction. Some examaples are hosted on flickr 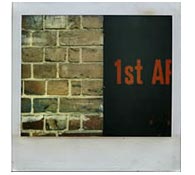 In the late 1990s I bought a Polaroid spectra camera; the cameras and film were still common at this point. I experimented as best I could given the constraint of the cost of the film. The sequence here is chosen more for their strange pictorial descriptions of what existed in front of the lens when I pressed the shutter than anything else. Subverting a camera's controls to produce interesting pictures while constrained by the 'automated' features of a camera is a long unshakable desire of mine. One edit on flickr.

I self publish some of my work. This is a list of some the titles.