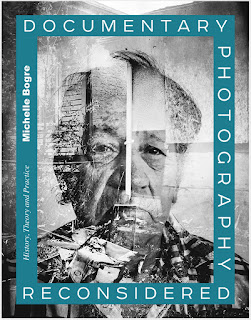 I was fortunate to be recently given an inspection copy of a new publication that explores the idea of documentary photography in the 21st century. Published by  BLOOMSBURY VISUAL ARTS, called DOCUMENTARY PHOTOGRAPHY RECONSIDERED, by MICHELLE BOGRE.
It has a collection of essays, profiles and exercises designed for the inexperienced to the professional who uses a camera to create documents. I will find it useful in my teaching moving forward for sure. This paragraph from chapter two, Memory is dynamic, resonates:-


"With our modern understanding of the vicissitudes of photography, how do we reconcile our knowledge of the malleability of the photograph with our cultural reliance on the image as evidence to form our collective memories? Even though critics and scholars debate whether photographs are “true,” generally the viewing public still intuitively or rationally believes that what appears in the photograph existed in front of the camera. Even when almost all digital images are retouched post-production, the public still believes in photographic truth. Viewers might distrust “the media,” but they still believe the photograph. The general audience doesn’t really care about the philosophical nuances of photographic truth. Viewers generally believe that even if photographs are manipulated, the changes are modest, and irrelevant to the truth of the event. In fact, most post-production only alters the original; it doesn’t reconstruct it. Post-production usually doesn’t so completely erase the original image as to negate its indexicality. Viewers also are not engaged in the debate about the profound philosophical difference between analog and digital photography. To them, an image is an image is an image."